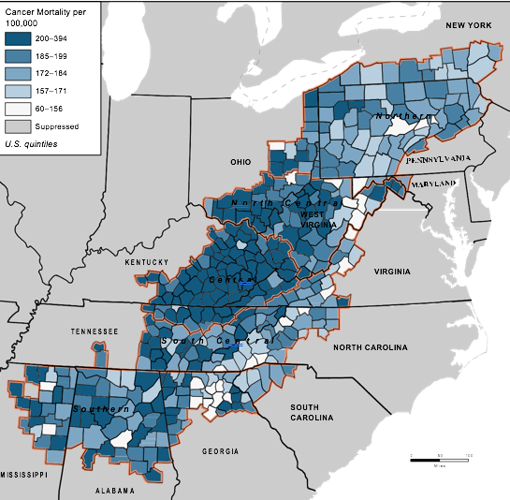 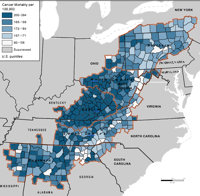 Data included in the report, retrieved from the National Center for Health Statistics.

It will take more than increased spending to solve the Appalachian region's health problems, according to one Morehead official.

Commenting on last Thursday's report from the Foundation for a Healthy Kentucky that shows the 13-state region lagging behind in 33 of 41 major health indicators compared to the remaining United States, Dr. Tony Weaver said the underlying issues are deeply rooted.

“The determinants of life expectancy are things like income, the type of job you have, your educational level, your ability to exercise and your diet,” Weaver told WMKY. “Those are basic things that are hurting us across the spectrum. If we could make changes there, I think we can impact this.”

Weaver is the assistant dean for the University of Kentucky’s Rural Physician Leadership Program in Morehead.

The new study shows some improvement, but the 25 million people living in the mountains and foothills of Appalachia are struggling to keep up with the health gains of the rest of the nation.

The region leads the country in seven of the top 10 causes of death. Deaths by poisoning, including drug overdoses, were a notable 37 percent higher than the national average.

While rural Appalachia does have comparatively fewer health care professionals, especially mental health providers at 35 percent less than the rest of the United States, Weaver only partially lays the blame on a lack of staff and services.

“It is a part of it, certainly, but we would not solve the problem simply by creating more doctors who practice the way previous generations have practiced,” Weaver said. “That is, I don't think Eastern Kentucky needs more pills, more antibiotics and more surgery, I think they need a change in the way people doctor.”

He believes the key to solving the problem boils down to adjusting lifestyles and mindsets.

“The least educated and the least able to take care of themselves people are the ones that are pursuing these really bad lifestyle habits,” Weaver noted. “That disables them early, and then we spend the money on the disability. So we're going to spend the money. The question is: do we get the benefits of it or do we simply do remediation the rest of their life?”

“It may not be that you can force education on people as a way of improving their life expectancy, but the first thing we've got to do is try and see,” he said. “It's pretty clear that more educated people live longer. This is obviously one of our problems allocating our money as a state. If we take it out of education, then we just turn that money right back around into excess healthcare costs and lost productivity.”

The study found Central Appalachia, mostly comprised of Eastern Kentucky, leads the rest of the region in deaths from heart disease, cancer, lung disease and other injuries. While Weaver would like to see more specialists in his neck of the woods, he contends that real progress will likely depend on the support of Appalachian educators.

The full report, entitled “Health Disparities in Appalachia,” can be found on the Appalachian Regional Commission's website, https://www.arc.gov/.