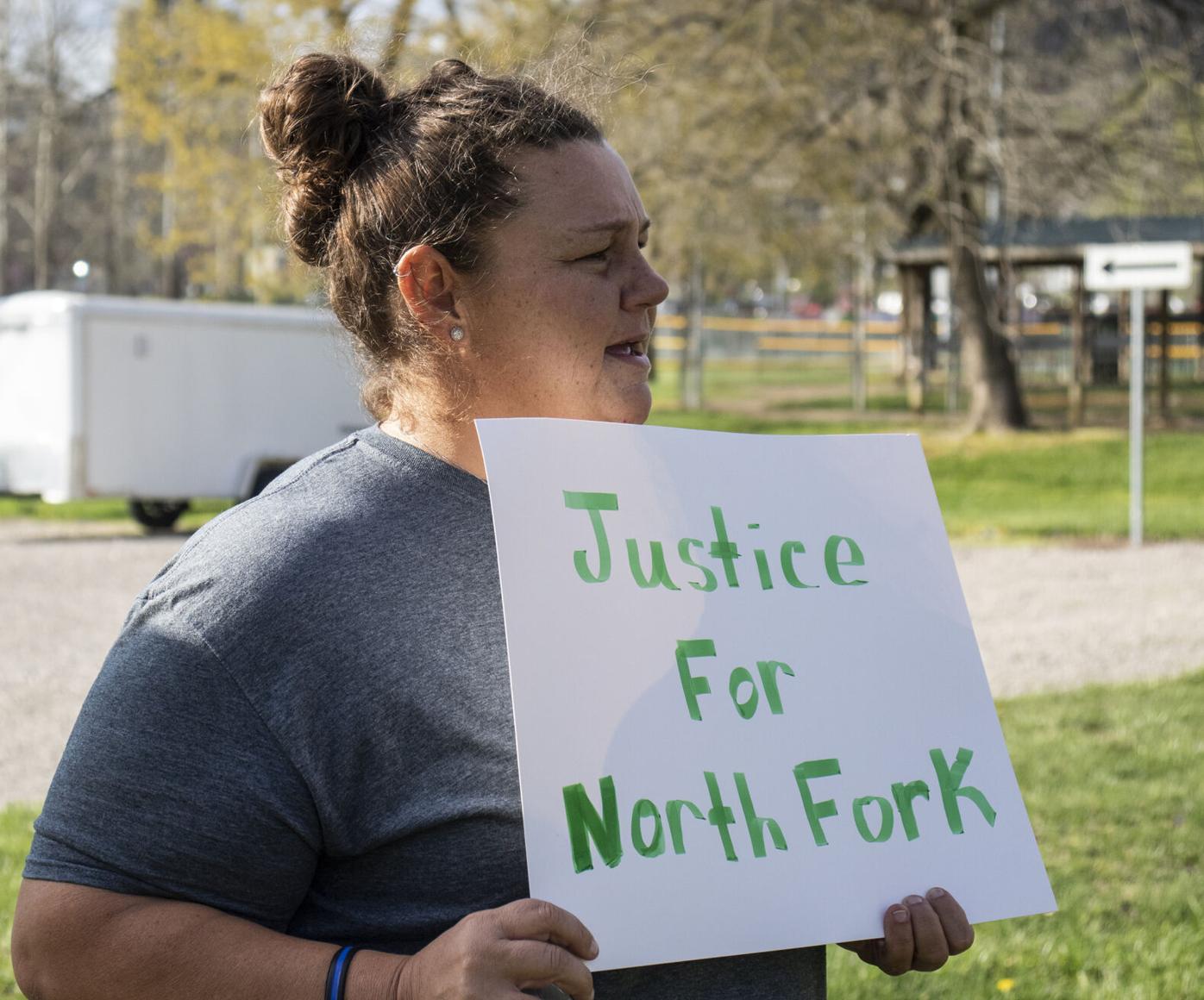 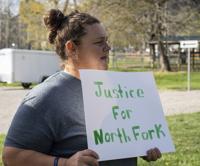 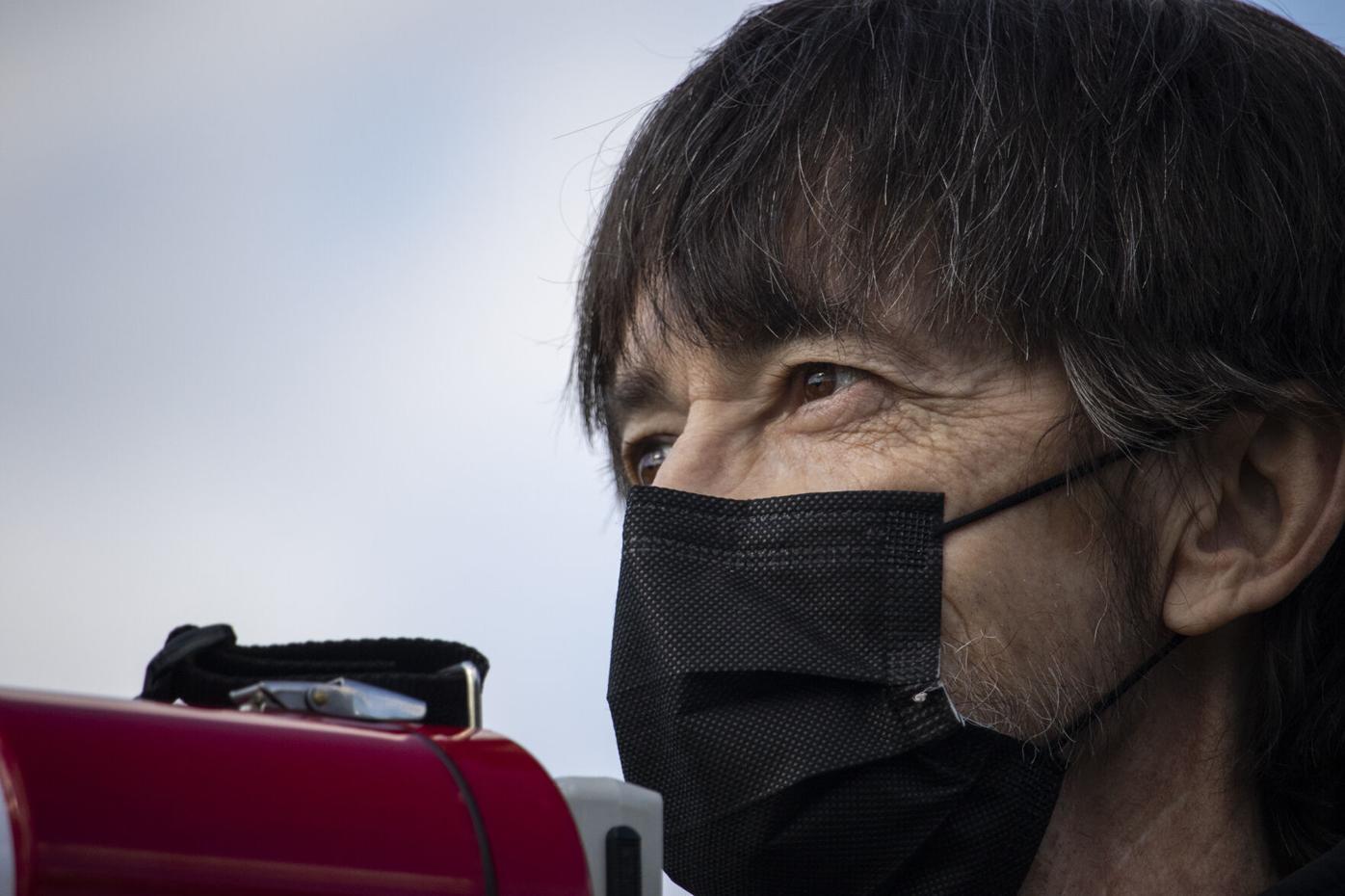 Jimmy McRoberts, a former reisdent of North Fork for 17 years, spoke to the rally outside the April Morehead City Council meeting about Justice 4 North Fork on Monday April 12, 2021 in Morehead, KY. Photo by Makayla Holder | The Trail Blazer 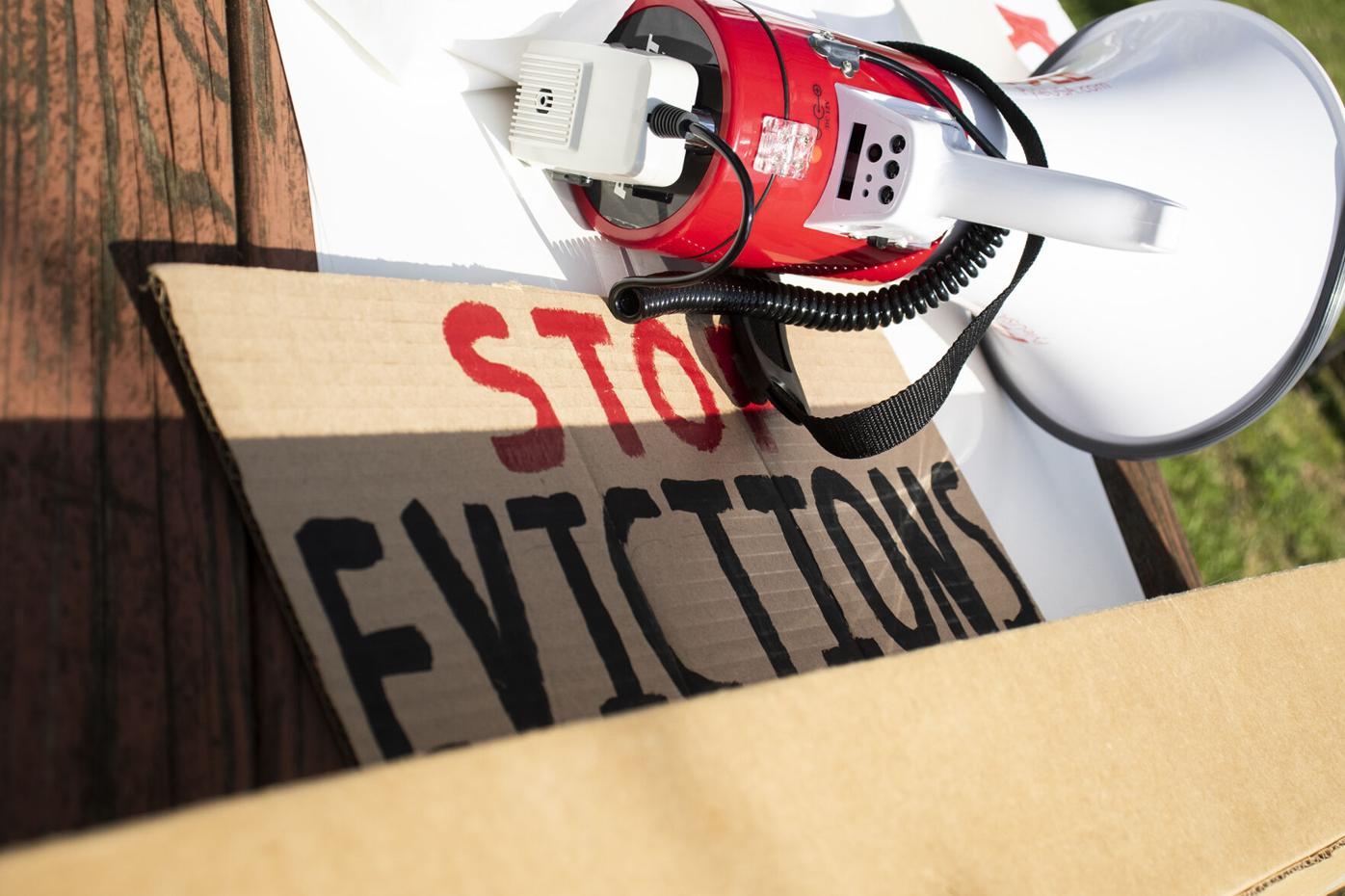 A sign for the Justice 4 North Fork rally on a table outside the at the April Morehead City Council meeting on Monday April 12, 2021 in Morehead, KY. Photo by Makayla Holder | The Trail Blazer 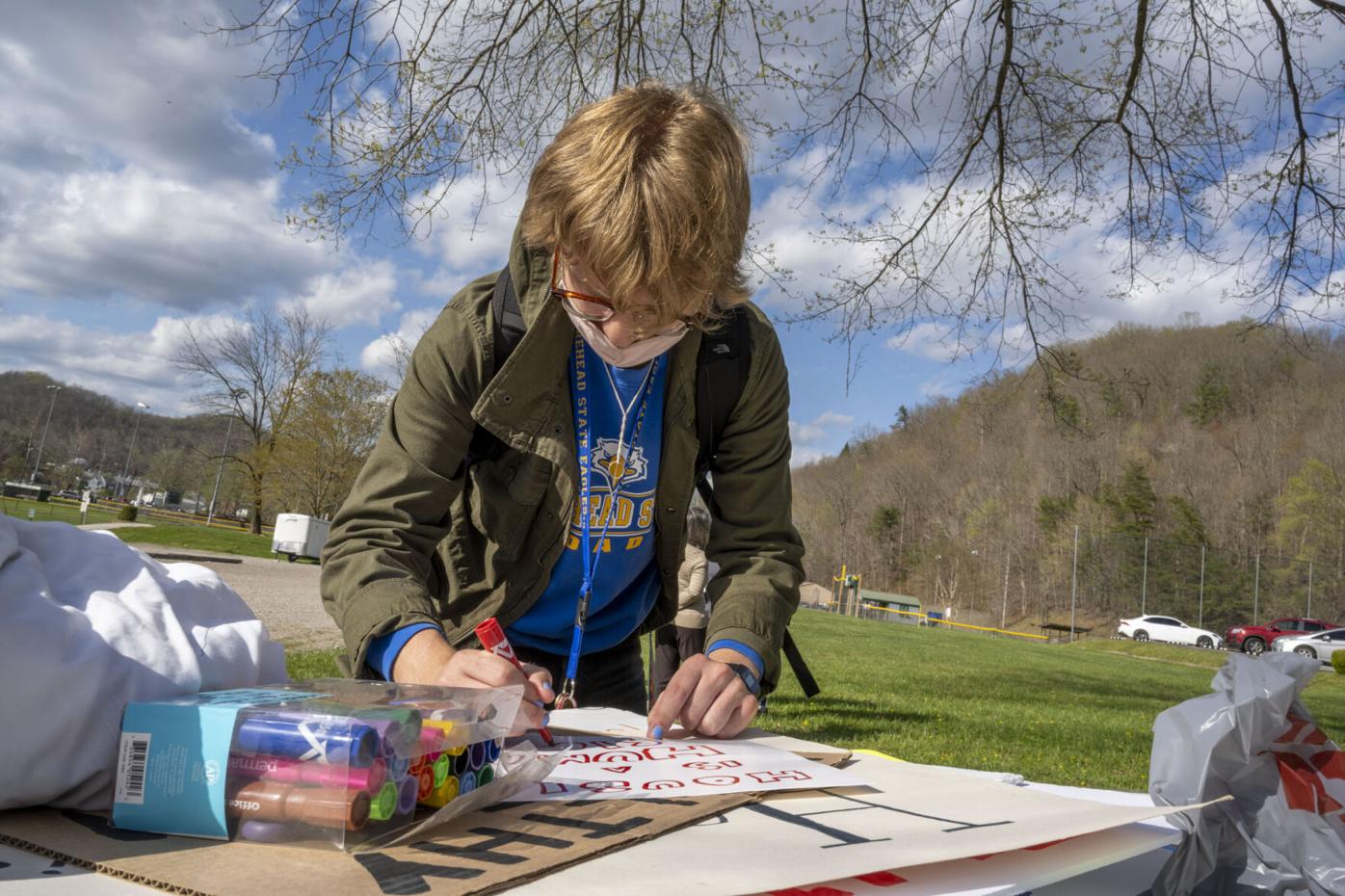 Jeremy Copley makes a sign for a protest Monday, April 12, 2021, against evictions at a trailer park to make way for an economic development project before a city council meeting in Morehead, Ky. Photo by John Flavell / For The Daily Independent 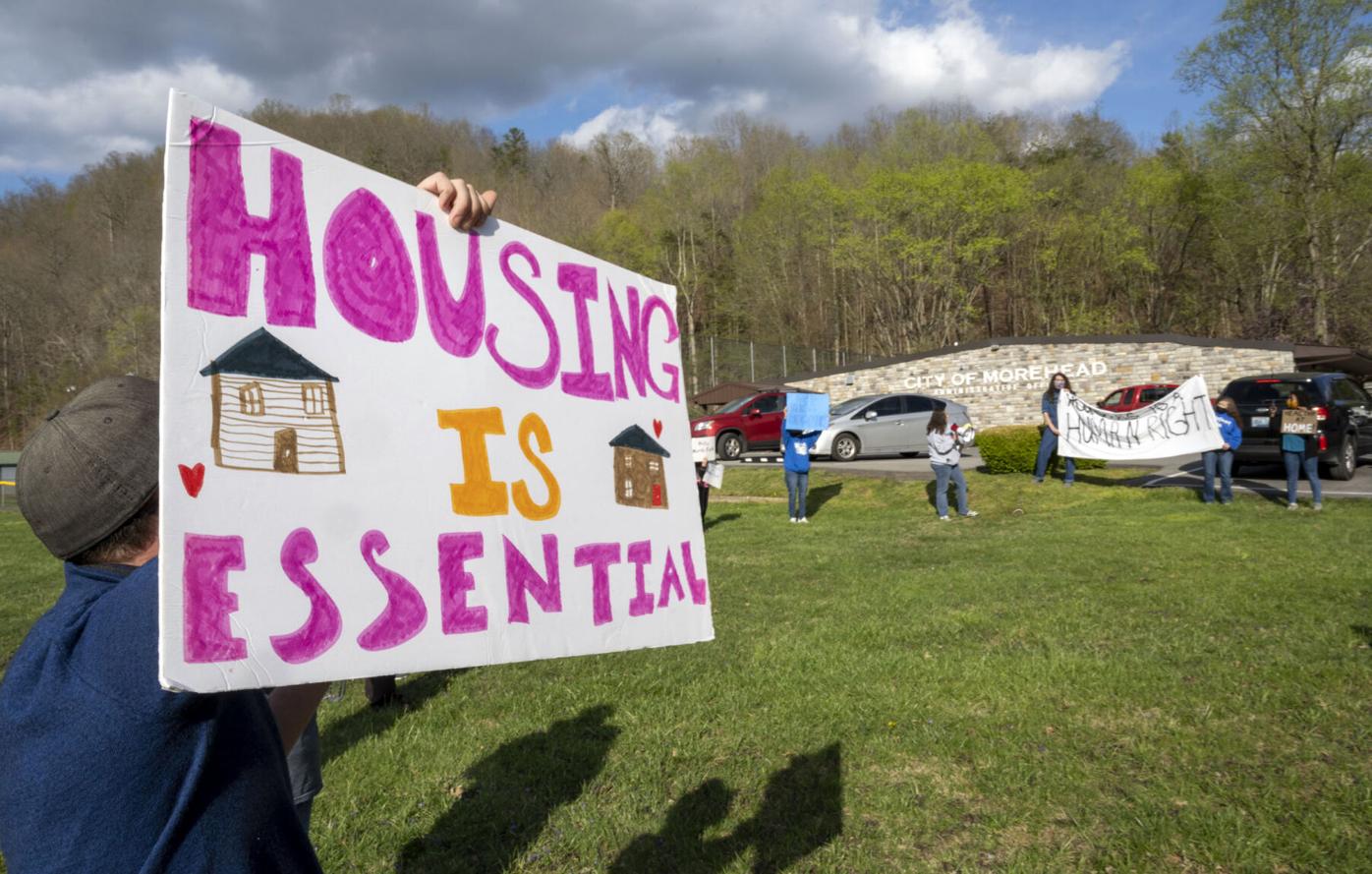 A group calling itself Justice for North Fork protest eviction notices going out to residents of the North Fork Trailer Park Monday, April 12, 2021, before a city council meeting in Morehead, Ky. A Lexingon developer has bought the property and plans a project. Photo by John Flavell / For The Daily Independent 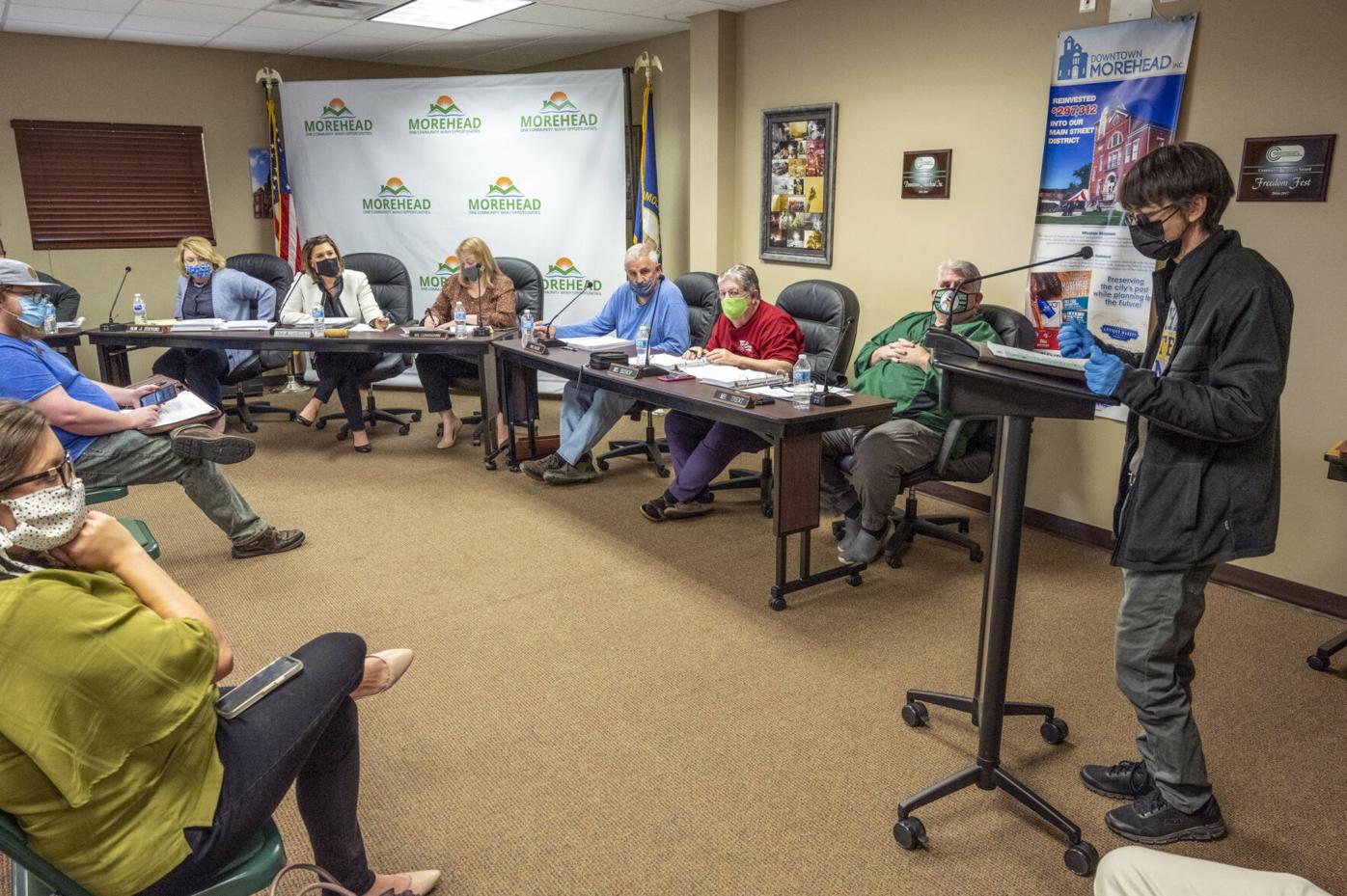 Jimmy McRoberts, right, addresses the Morehead City Council Monday, April 12, 2021, about evictions at the North Fork Trailer Park during a meeting in Morehead, Ky. A Lexington developer has bought the land the park is on and plans a development there. Photo by John Flavell / For The Daily Independent

A campaign led by the residents, former residents and supporters of the North Fork Mobile Home Park who face eviction to make room for a  land sale and retail development. They rallied to express anger towards their displacement and to make their demands known to the city, county, current landowner and developer.

“It’s bad. I mean we definitely were having financial issues,” said Crystal Barnett, a former resident of seven years. “We have been in a pandemic. People have been laid off. I’m lucky I have not. However, I do have a child and it’s very hard.”

Barnett is one of the many homeowners who received an eviction letter in early March informing her she had until April 30 to be moved out of the park.

She originally heard of the eviction through Facebook, but was told by the park manager it wasn’t being sold. One of the complaints of Justice 4 North Fork is they have been “misled, lied to, and mistreated” throughout the process.

However, the sale was discussed in open city council meetings in September and October of 2020, according to Patrick Madden, the Lexington developer

“At the hearings, we held there was really nobody objecting,” said Madden. “Everybody looked excited about the prospect of turning this piece of property into a revenue generator and jobs recreator for the city and the county. That’s not to say you can’t at the same time work with the current people and find them places.”

Madden will purchase the trailer park on Flemingsburg Road near the I-64 from the Fraley Commercial Properties, the current owner and landlord and plans a businesses and restaurants site that could bring 290 jobs and create a $970 million in economic impact to the city.

Fraley Commercial Properties handed out the evictions and offered $1,000 towards the removal of each trailer moved off the lot by March 30, money that goes directly to the movers.

Another complaint of Justice 4 North Fork is the process of moving, especially in the time allotted, is costly and often damages the home. They also felt that if the developer was getting money in tax cuts why aren’t they get more money to move.

According to Mayor Laura White-Brown in a press release, both the city and the county passed a Tax Increment Finance, TIF, ordinance in December of last year. The estimated amount of the TIF was not disclosed.

She also said that over $30,000 has been donated to Frontier Housing to allocate grant funds for the people effected accessible through application. As of Monday, only 24 applications had been filled out.

White-Brown agreed to a meeting Rowan County Judge-Executive Harry Clark, Madden and the current owner. However, she could not guarantee the others would agree to meet.

The city council did approve a fair housing resolution stating the city will assist all person who feel they have been discriminated against in the sale, rental, leasing or financing of housing or land. The resolution was related to two CDBG rants the city received, and not the North Fork situation.